Tsukiuta has become increasingly popular lately and fans are already craving for more. But since the anime has already ended and some fans aren’t able to watch the stage plays, what can even quench their thirst? Fret not, Tsukiuta stans -- Tsukino Park, Tsukino Paradise and Tsukitomo.  -TSUKIUTA. 12 Memories- are coming your way! Tsukiuta is a music and drama series that started in 2012 as a collaboration between voice actors and Vocaloid music producers. Revolving around a set of 24 characters, Tsukiuta features two male and two female idol groups, with each representing a certain month. The two all-male idol units (Six Gravity and Procellarum) are from Earth while the two all-female units (Fluna and Seleas) came from a society existing somewhere in the moon. All of them are under the Tsukino Talent Production, which is usually shortened as Tsukipro.

The franchise has already spawned a Summer 2016 anime series by Studio Pierrot entitled Tsukiuta. The Animation (ツキウタ。 THE ANIMATION), a manga series as well as several stage plays which were also shown on the same year. On the other hand, other Tsukipro units which have not been featured in the 2016 anime will be featured in the recently announced 2017 Tsukipro anime.

Released last year is Tsukino Park (ツキノパーク), which is also known as Tsukipa. It is a smartphone app that lets you play not only the main 24 characters of Tsukiuta, but also the rest of the members of the Tsukino Talent Production, such as SolidS and ALIVE’s SOARA and Growth. After registering the game, you may choose your first pair of avatars from the 12 pairs of Tsukiuta. Remember to be careful of your choices since you cannot change this later!

There are several missions to complete in each game, and the players must accomplish each mission with the help of their selected character. The player’s chosen character, as well as the support-of-the-day character have special skills which can be activated during the game. This game features five mini-games: a rhythm game, Whack-a-Rabbit, Tsukiuta. Puzzle, Rabbit Tower and a shooting game. There are special monthly events where players are awarded various prizes such as coins, clothes, items and experience points. Tsukino.Puzzle, the puzzle game that is full of surprises. Time to whack some furries with Whack-a-Rabbit! Take note, the rhythm games are different from the usual (such as the ones appearing in Love Live!) but are still enjoyable nonetheless.

You can download the game on App Store or Google Play. 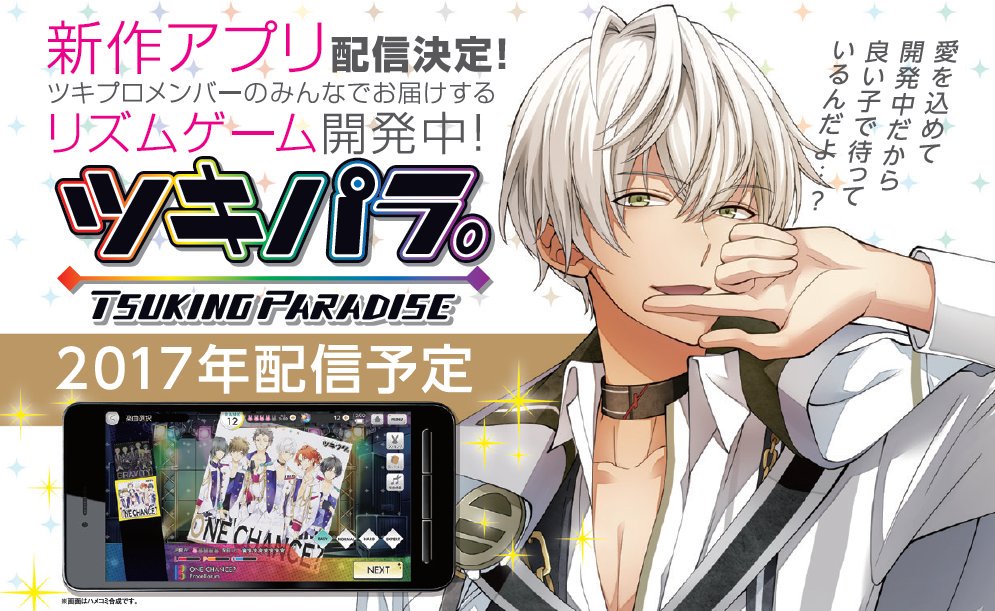 There isn't an official release date yet, but fans have speculated that it might be out on early 2017.

Announced way back in June on the Tsukiuta. channel broadcast, Tsukino Paradise (ツキノパラダイス) is a rhythm game that is being developed by Bandai Namco Entertainment. Unlike its predecessor, this 2017 app is more similar to the usual rhythm games and will feature the main characters of Tsukiuta. as well as the rest of Tsukino Talent Production, which includes SolidS and ALIVE Series’ Growth and SOARA.

A pre-registration was opened earlier in November for Android and iOS users. Help them find their missing photos within the game!

Planned to be released on Spring of 2017, Tsukitomo. -TSUKIUTA. 12 Memories- (ツキトモ。 -TSUKIUTA. 12 memories-) is similar to the anime wherein the daily lives of the 12 members of Six Gravity and Procellarum are featured.

Tagged as a ‘communication adventure’ game, this game is of the visual novel type in which the player must look for the missing photographs full of their memories at the Tsukino dorm by completing various situations and mini games.